Elected leaders sworn in for Pottawattamie County, eager to serve 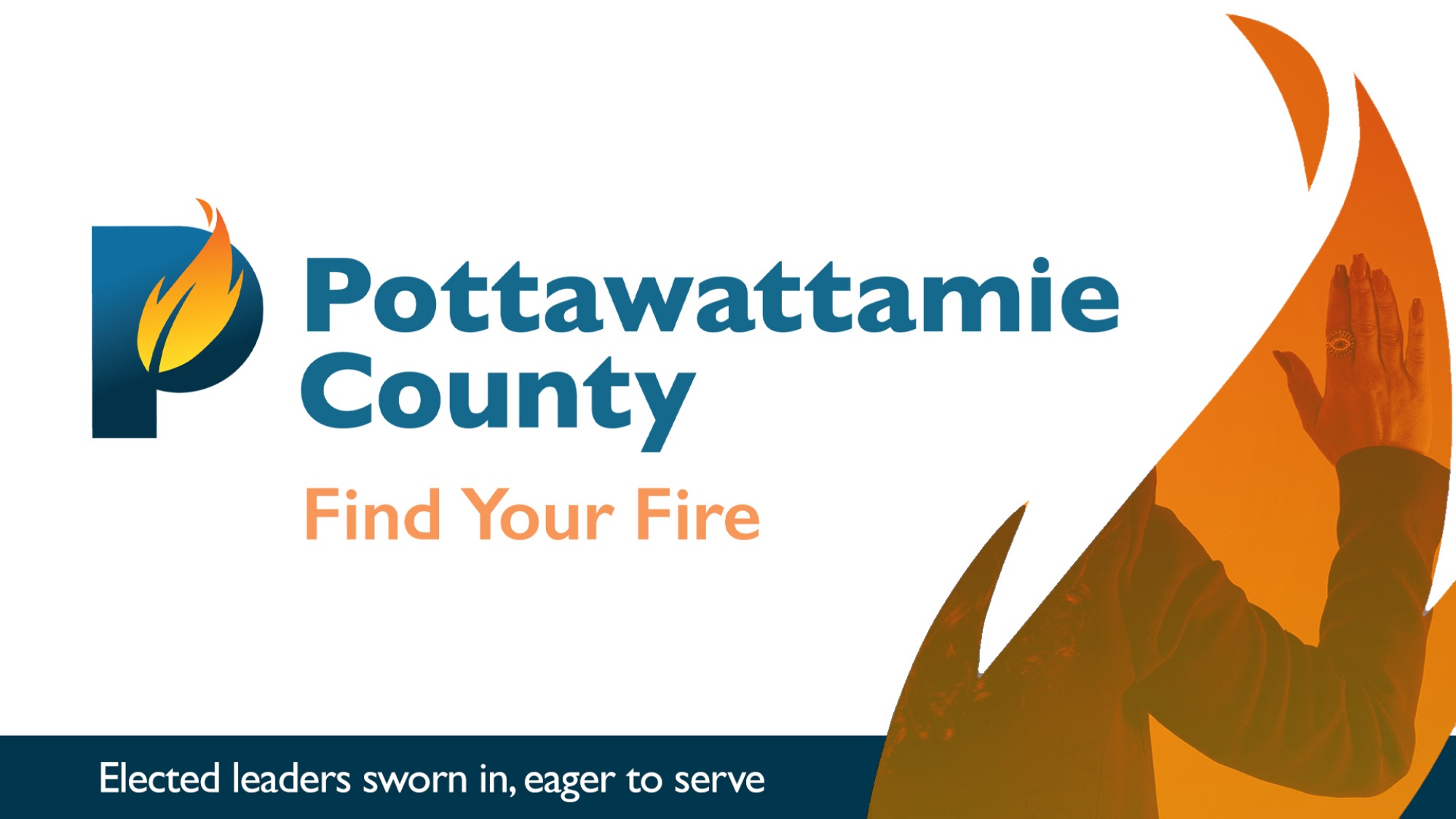 Among re-elected leaders sworn in Tuesday was Pottawattamie County Supervisor Scott Belt. He joins County Supervisors Brian Shea and Tim Wichman, whose seats were not up for election in 2022, as returning members of the board. This is Belt’s fourth consecutive term serving on the board.

“I ran for another term because I feel there’s still a lot to accomplish,” said Belt. “I enjoy serving the great citizens of Pottawattamie County, and I look forward to working with our new Supervisors to keep things headed in the right direction.”

Susan Miller and Jeff Jorgensen are new members of the Pottawattamie County Board of Supervisors. While the two have different professional backgrounds, they share a passion for making an impact.

“It’s rewarding to begin serving the people who elected me,” said Miller. “There is so much positive momentum for the County, and I look forward to exploring additional ways to promote Pottawattamie County as a great place to live, work, and play.”

The goal to highlight unique attractions offered in the County is a sentiment echoed by Supervisor Jorgensen.

“We have the Lewis & Clark Monument, the Mormon Trail, Abraham Lincoln, we have a lot of history here,” said Jorgensen. “I’m looking to make Pottawattamie County a tourist destination for Iowa.”

County Attorney Matt Wilber was also re-elected last November. His primary responsibilities are to provide legal counsel for the Board of Supervisors, to enforce the laws of the State of Iowa, and to act as legal representative for the County in court cases. Wilber was first elected as Pottawattamie County Attorney in 2002 and is beginning his sixth consecutive term.

“I am honored to be allowed to serve another four years as County Attorney,” said Wilber. “Pottawattamie County has a fantastic blend of urban, suburban, and rural communities - each with its own sets of legal challenges and opportunities.  I'm excited to see what the next four years brings."

Lea Voss is another county leader that was re-elected last November. Her role as County Treasurer serves several purposes, including receiving all money payable to the County, disbursing money owed or payable by the County, and keeping a true record of all receipts and disbursements of the County. Voss has been with the Pottawattamie County Treasurer’s office since 1977. She is beginning her 3rd consecutive term as Treasurer, having first been elected in a special election in 2012.

“My years of experience tell the story of my passion each and every day,” said Voss. “I am honored to continue to represent Pottawattamie County as County Treasurer and serve the citizens of the county.”

After nearly eight years of successful stints in various departments with Pottawattamie County, Andrew Moats is beginning his first term as County Recorder. His position is responsible for keeping records of several important documents, including deeds, and real estate contracts in Pottawattamie County. Moats has served as Deputy Recorder since October 2021.

“I’m beyond excited to be sworn in and hit the ground running,” said Moats. “What makes Pottawattamie County so special is the people; both the team I work with every day and the people we strive our best to serve. I’m really looking forward to this opportunity.” 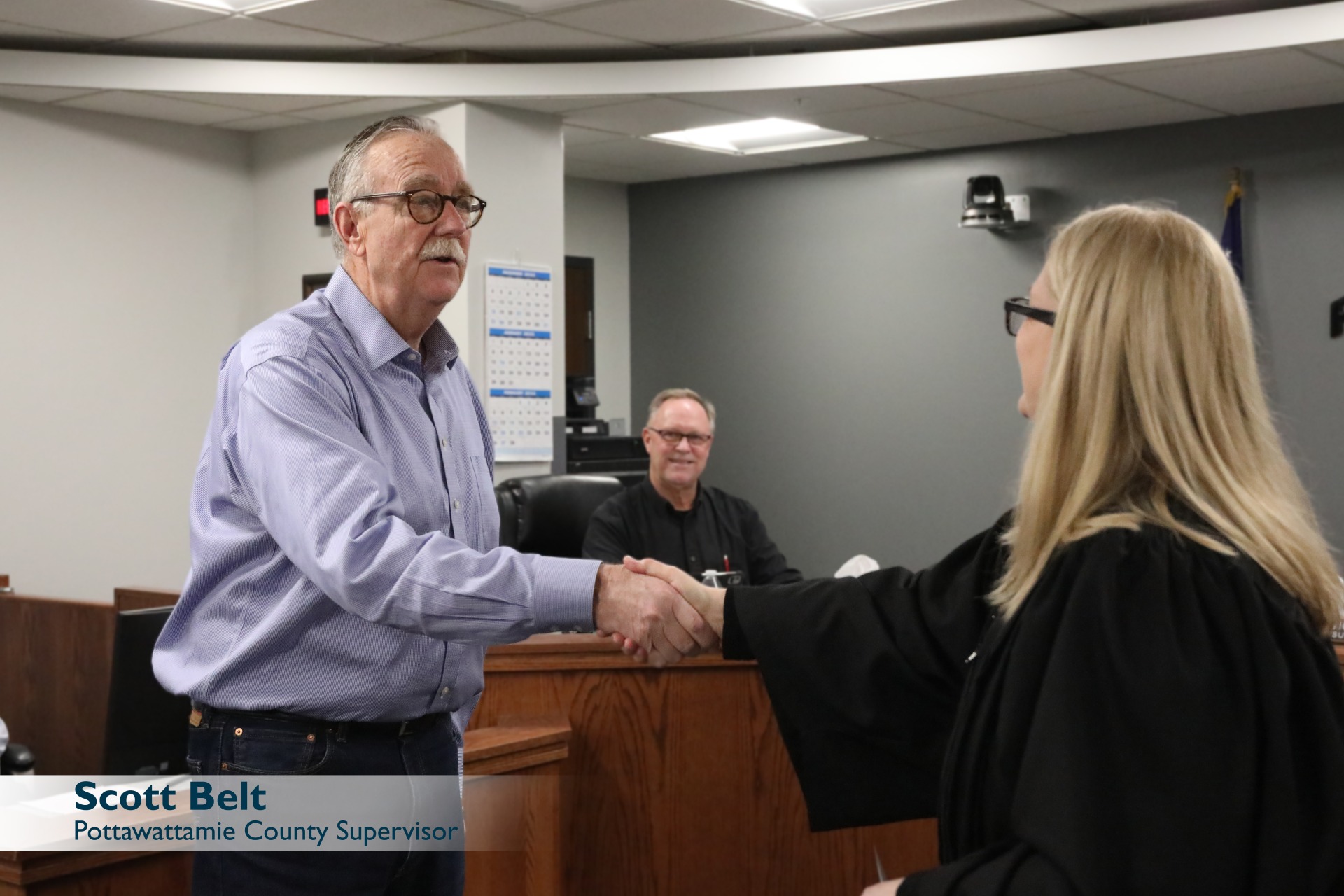 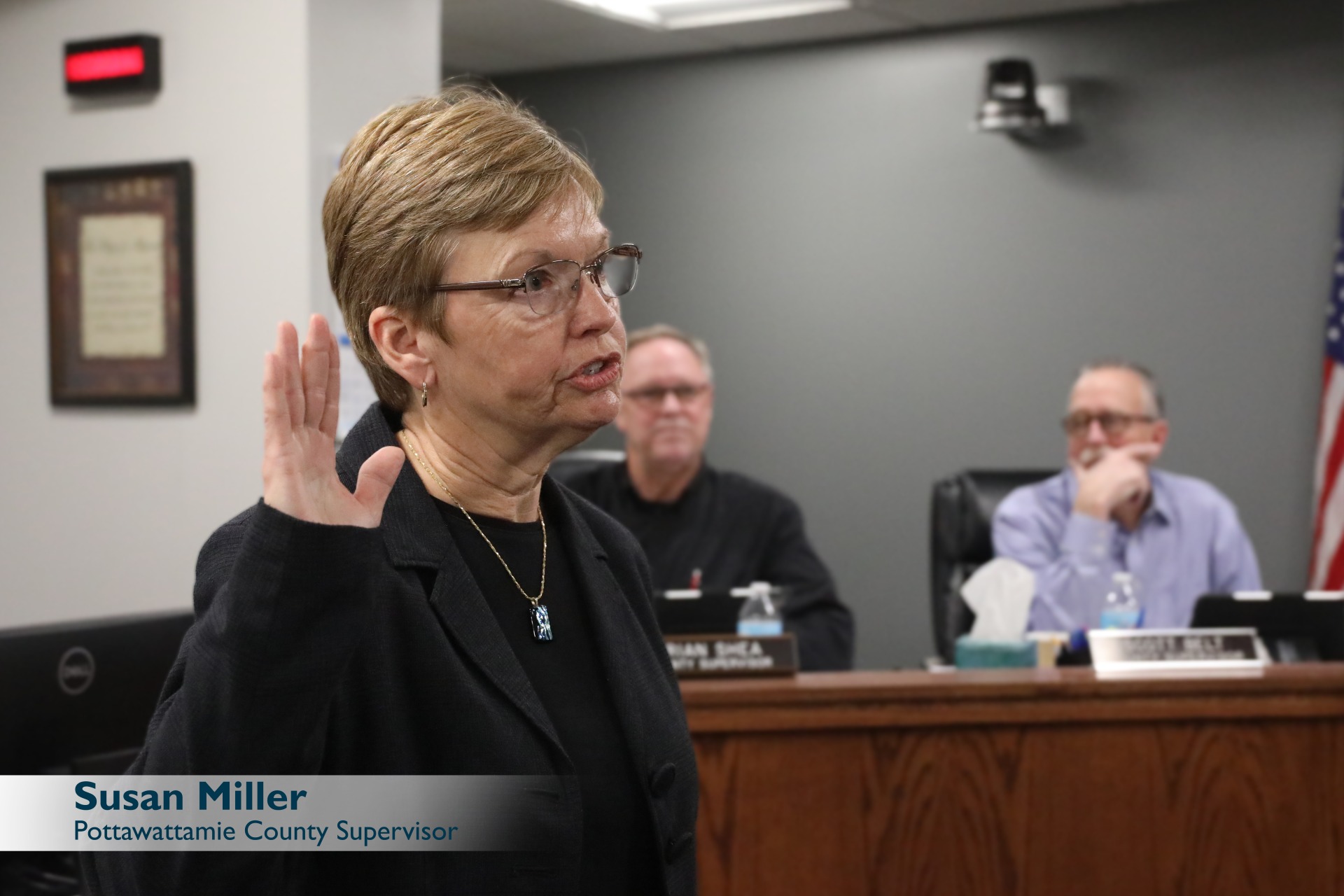 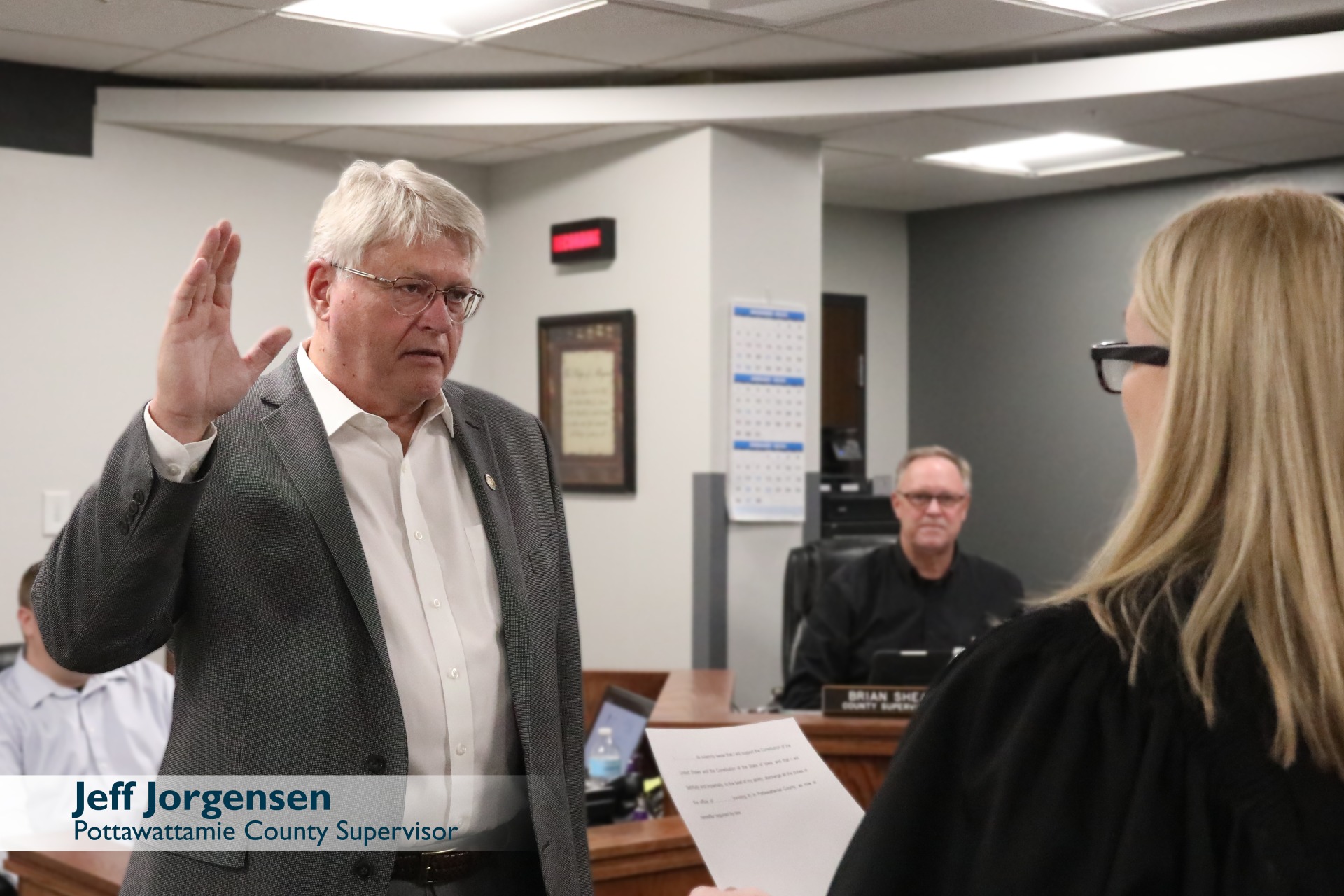 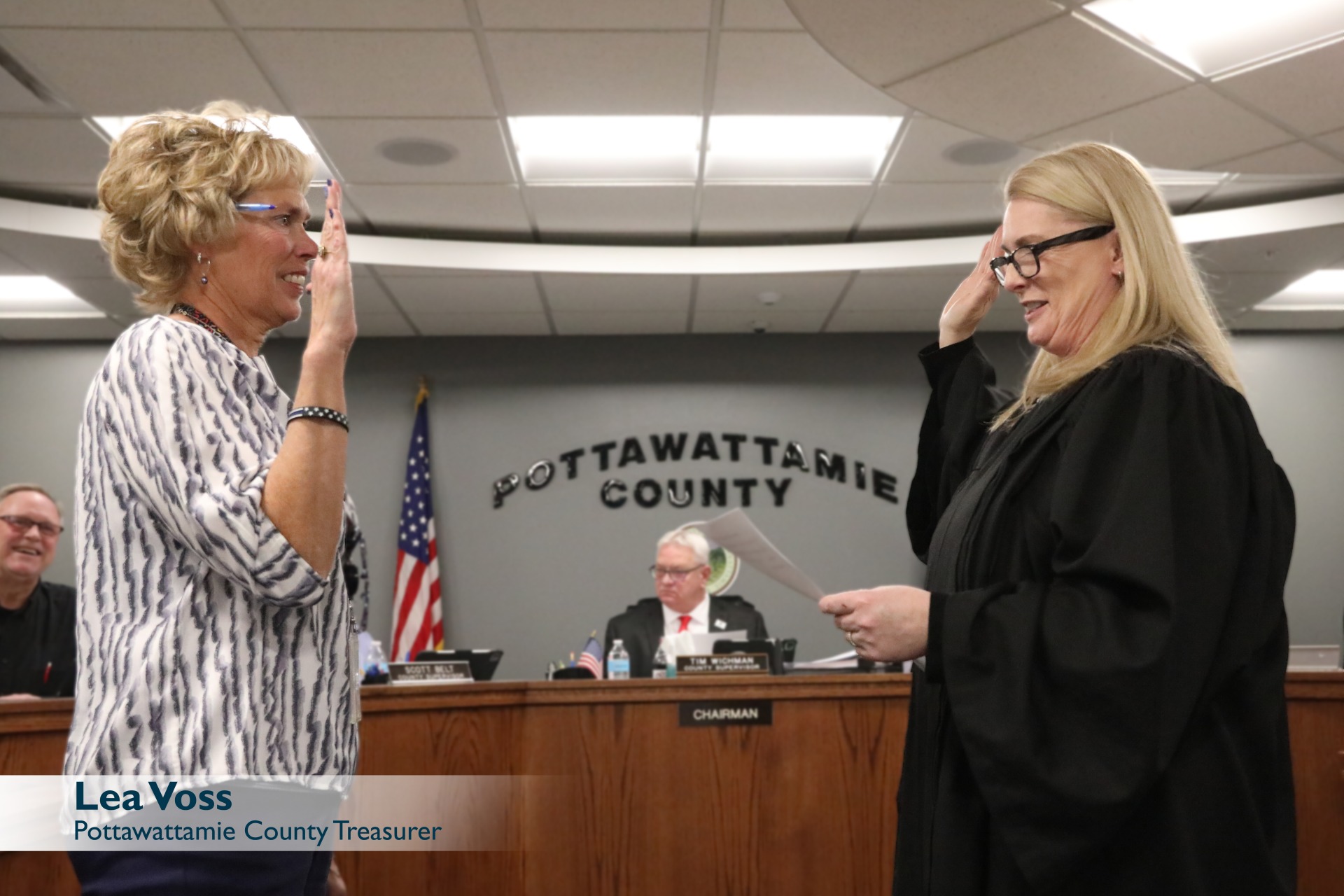 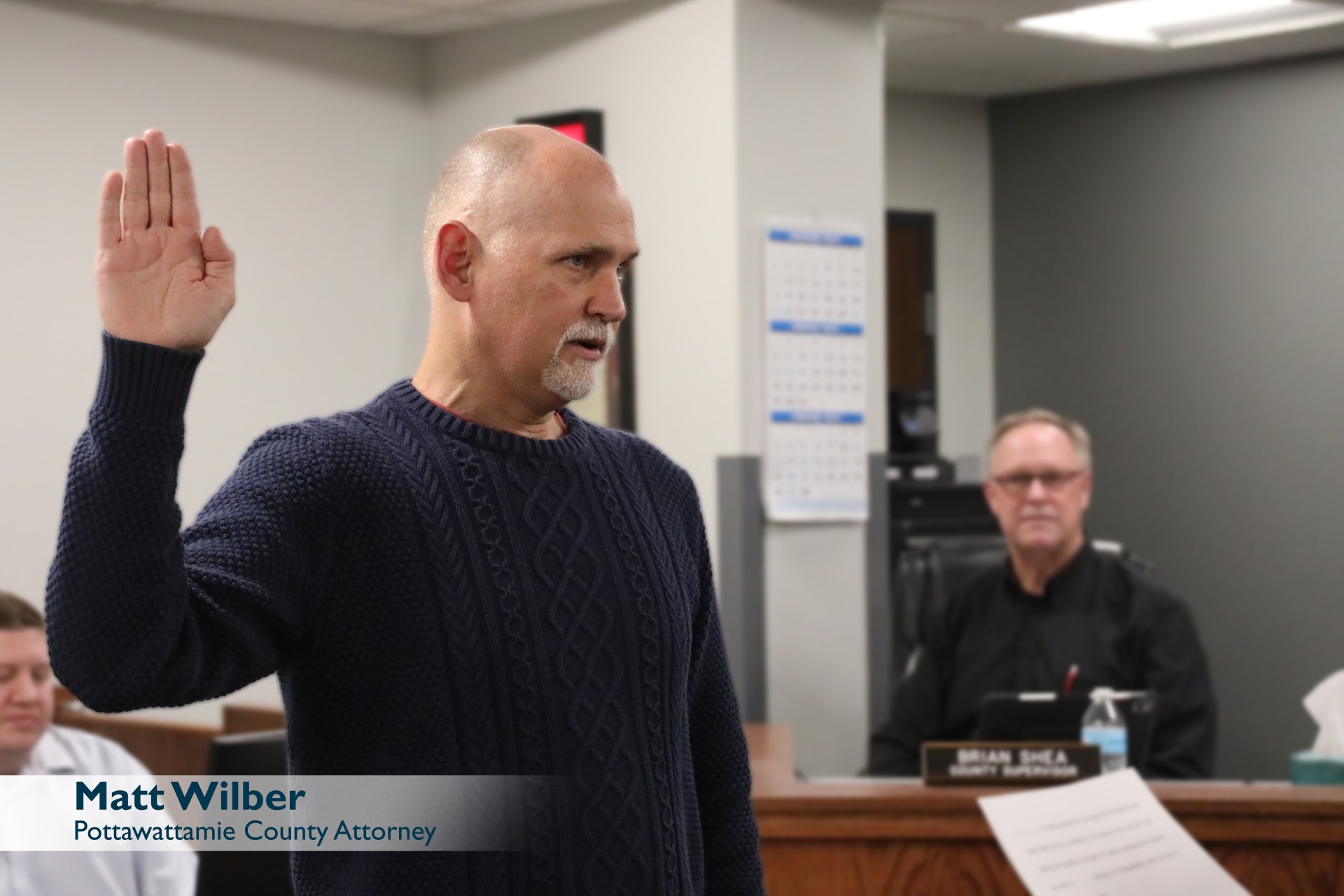 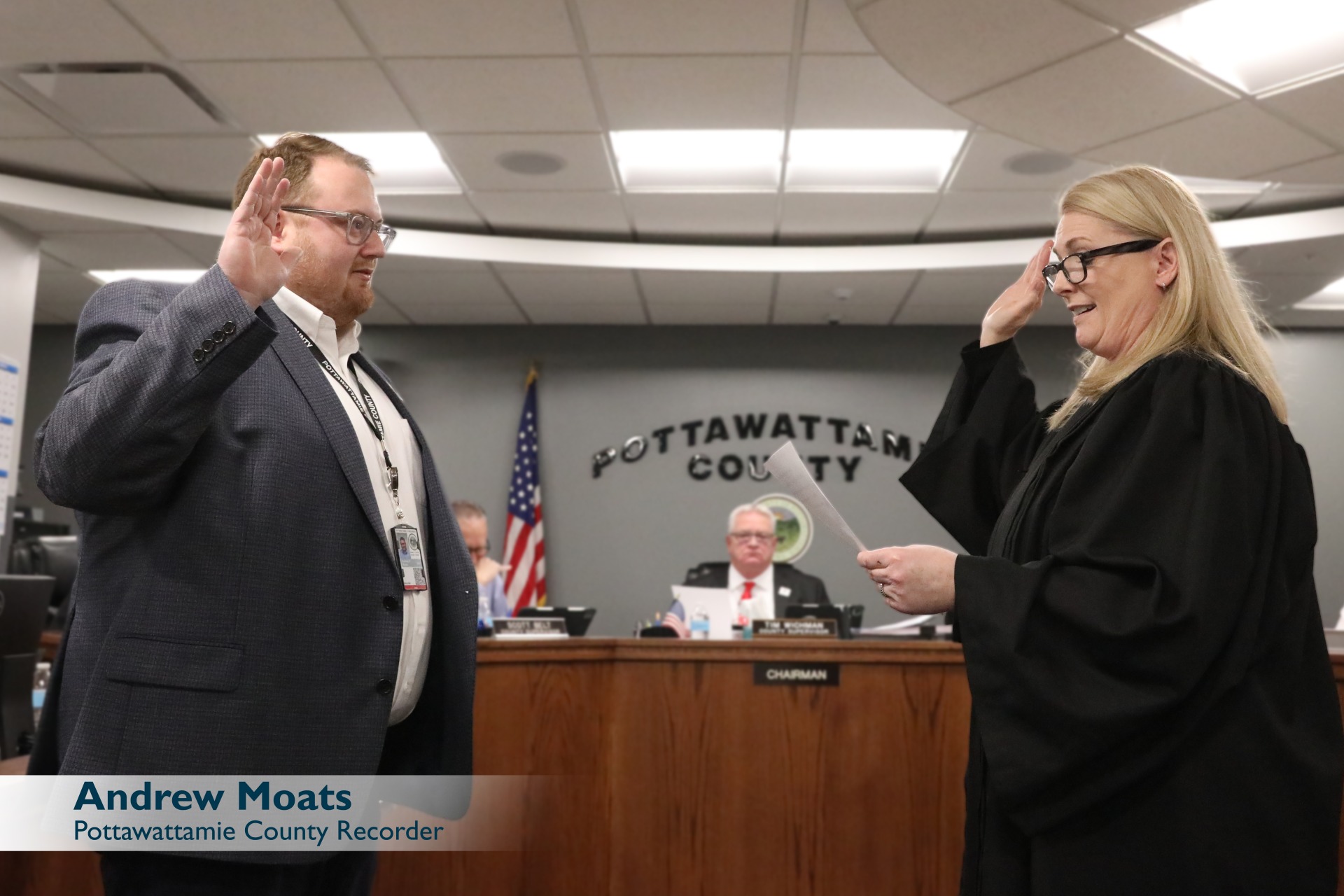 This page was printed from the Pottawattamie County, Iowa, website, POTTCOUNTY-IA.GOV, on 2/4/2023.